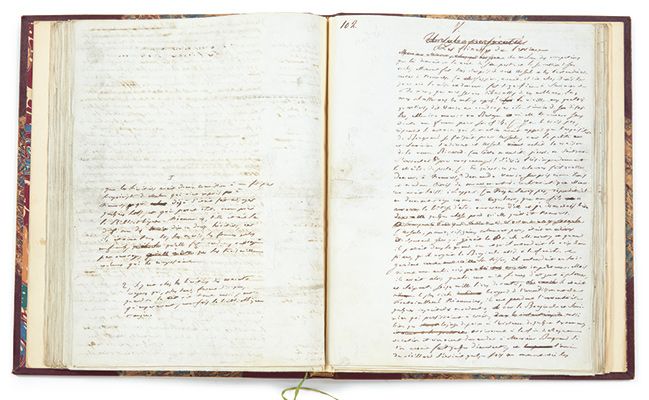 BALZAC’S MANUSCRIPT “URSULE MIROUËT”
BALZAC Honoré de (1799-1850).
Signed original manuscript, “Ursule Mirouët” (1841)
An outstanding complete manuscript of a novel by Balzac, one of only two still in private hands.
Written in June-July 1841, the novel “Ursule Mirouët” was published in instalments in “Le Messager” between 25 August and 23 September 1841, in 21 chapters, before being published by Hippolyte Souverain in May 1842, in two volumes. In January 1843, it was republished in Volume 5 of “La Comédie Humaine” (Furne), at the beginning of the first volume of “Scènes de la vie de province”.
In his correspondence, Balzac described “Ursule Mirouët” as “the finest work” (5 January 1842), “the masterpiece, in my view, of the depiction of manners” (1 May 1842). Later adding: “Ursule Mirouët is the happy sister of Eugénie Grandet” (14 October 1842).
This manuscript, a rough draft, was used for the printing, as is shown by the names of the typographers written in the margins. It is written uninterruptedly, in brown ink, with a regular, fine and sloping hand, on just one side of a slightly bluish paper, with corrections made during the writing. There was a 6 cm. margin on the left, in which Balzac made some 300 additions and corrections, ranging from just one word to whole sentences, adding a reply, rounding off the description of a character, or adding a development.
800,000/1,200,000€
Continue without accepting >

With your consent, we would like to use cookies placed by us on this site. Some of these cookies are strictly necessary for the smooth running of the site. Others are used to:

Your consent to the installation of non-strictly necessary cookies is free and can be withdrawn or given at any time.

By allowing these cookies, you agree to the deposit, reading and use of tracking technologies necessary for their proper functioning.
Read more about our privacy policy.