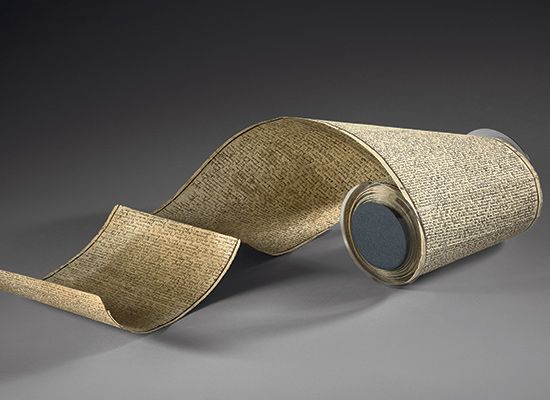 MARQUIS DE SADE’S MANUSCRIPT
“LE ROULEAU DE LA BASTILLE”
SADE, Donatien-Alphonse-François, marquis de (1740-1814).Original manuscript, “Les 120 jours de Sodome ou l’école du libertinage”, 1785; a strip of 33 folios pasted end-to-end, forming a roll 12.10 metres in length, with a width of 11.3 cm, written first on one side, then on the other.
An extraordinary manuscript roll of the most scandalous of the texts of erotic literature.
It was in the Bastille, where he was transferred to on 29 February 1784, that Sade would copy out, on this amazing roll of paper, the drafts of “Les 120 journées de Sodome”, begun, it would seem, two years earlier. On two occasions Sade dated this manuscript roll: at the bottom of the front: “This strip was written in 20 evenings between 7 and 10 pm, and was finished this 12 7bre 1785”; and then at the very end: “This whole large strip was started on 22 8bre 1785 and finished in 37 days”; it was thus written between August and November 1785. The folios are delimited on each side by a thick brown ink line; some widths of paper bear their assemblage number; in the margin, Sade also wrote the number of the day of the first part; the folios are filled with a small, serried handwriting in brown ink; there are a few deletions and crossed out passages.
The novel is set at the end of Louis XIV’s reign, shortly before the regency. Sade first introduces at length the four main protagonists, wealthy libertine aristocrats; then their women. The plan of the “four scoundrels” involved not only indulging in every possible form of debauchery, but also, in order to arouse their lechery, to have recited to them (based on the model of the “Thousand and One Nights” and the “Decameron”) all the most extraordinary deviations of debauchery, by way of four experienced madams, each one with the task of reciting 150 passions, ranging from the simplest to the foulest of tortures and to murder during each of the four winter months during which all these people would live confined in Silling Castle, lost in the Black Forest. This novel is the “most gigantic catalogue of perversions”, to use Jean Paulhan’s words. “Never, in any period, in any literature, had anyone written anything so scandalous, so repulsive and so unbearable”, wrote Jean-Jacques Pauvert.
This roll, stored in a case and hidden between two stones, abandoned by Sade in his dungeon in the Bastille when he was suddenly taken from it on 2 July 1789 (twelve days before the fortress was taken) to be transferred to Charenton, was found in his cell by a certain Arnoux de Saint-Maximin, who sold it to the Villeneuve-Trans family. First published in 1904, in a very inaccurate way, by its new owner, the German psychiatrist and sexologist Iwan Bloch (under the pseudonym of Eugène Dühren), then acquired in 1929 by Charles and Marie-Laure de Noailles, the manuscript was entrusted to Maurice Heine, who produced a reference edition of it (1931-1935). When the De Noailles died, the roll passed to their daughter Nathalie. It was stolen in 1982 by the publisher Jean Grouet, who sold it illicitly to the Swiss bibliophile Gérard Nordmann. A legal battle ensued, waged by Carlo Perrone, the son of Nathalie de Noailles; unlike French law, Swiss law ratified Gérard Nordmann’s ownership of the manuscript. The manuscript was on loan for a while to the Bodmer Foundation in Geneva, then, after a transaction between the Nordmann family and Carlo Perrone, it was acquired in March 2014 by Aristophil, and found its way back to France.
4,000,000/6,000,000€
Continue without accepting >

With your consent, we would like to use cookies placed by us on this site. Some of these cookies are strictly necessary for the smooth running of the site. Others are used to:

Your consent to the installation of non-strictly necessary cookies is free and can be withdrawn or given at any time.

By allowing these cookies, you agree to the deposit, reading and use of tracking technologies necessary for their proper functioning.
Read more about our privacy policy.